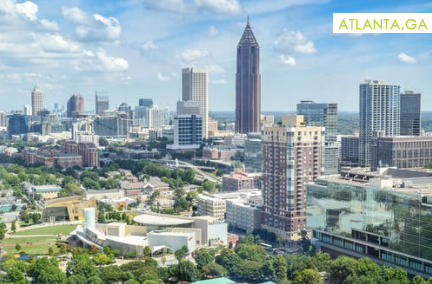 VTRAC Talent Tour: “Peach” for the Stars in Atlanta, Georgia!

From Tampa to Orlando, this week we thought it would be “peachy” to continue our travel northwards into Atlanta, Georgia.

The city has never been a stranger to tech. In fact, Atlanta is known as “Transaction Alley” because an estimated 70 percent of all payments transactions are processed there. It’s also known for being home to 16 Fortune 500 companies, including #TheHomeDepot, #UnitedParcelService (#UPS), and #Coca-Cola Co.

Historically successful, these days Atlanta is working on building a start-up environment that rivals those of other metropolitan areas.  Already home to a multitude of fast growing start-up companies such as #Kabbage, #Greenlight, #RoadSync, #Patientco, #Bakkt, #GreenSky, #BitPay, and #ReibusInternational, this week we look at some of the key factors that gives those in Atlanta the opportunity to “Peach” for the Stars!

A Full-Stack Village
Created in 2013, the Atlanta Tech Village is evidence in itself of the growing start-up scene in Atlanta. This tech hub has resulted in the creation of more than 6,500 jobs and has raised more than $900 million in funding to date. Ranking among the top five largest tech hubs in the nation, the Atlanta Tech Village houses more than 1,100 people and over 300 start-ups.

BookSmarts
Another contributing factor to Atlanta’s success is the steady source of talent for the start-up community flowing from Emory University, Morehouse College and, probably most importantly, Georgia Tech whose computational college also supports a number of on-campus startup programs.

Money Can’t Buy Happiness, But it Might Help you Bargain with Success.
According to Startup Atlanta, the city is also home to many funds and accelerators. On top of that, there are two major annual VC conferences including Venture Atlanta, which hosts over 1,000 entrepreneurs, investors, leaders, and students and Pitch Atlanta, an exclusive, invite-only event connecting entrepreneurs and investors.

This is Not a New Secret!
The promise of Atlanta is nothing new. In fact, twenty-six companies headquartered in metro Atlanta were mentioned in the 2019 Fortune 1000, sixteen of which ranked in the elite Fortune 500. Atlanta is also home to several unicorns, including #Rubicon Global, #Mailchimp and #One Trust.

Healthy Competition
One of the key drivers of Atlanta’s success when it comes to its tech and start-up scene is the unique layout of it’s businesses and hubs. In a very unique way, Atlanta’s start-ups seem to be straddled among each other in many smaller hubs that act in a way that is complementary as opposed to competitive, creating a friendly environment that promotes diversity and success.

So if you are thinking about a move to accelerate your business, Ap-peach-iate Atlanta, and keep in mind there is nothing fuzzy about this southern city. Ready to make a move? VTRAC can help. Let’s chat.