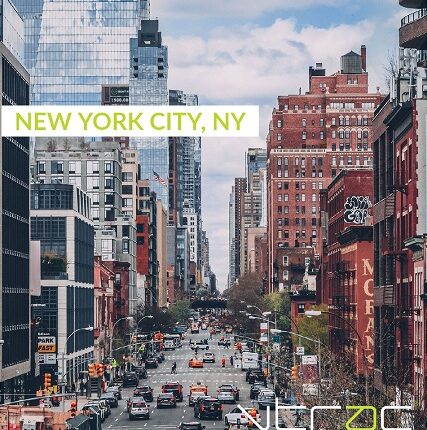 NY NEWS: Talent continues to sizzle even during Autumn in New York City!!

As the November temperatures begin to settle in, this week we’re taking the VTRAC Talent Tour to New York City where, regardless of the time of year, innovation is always hot and the temperature in the talent pool is constantly rising!

While VC’s and innovation seem to be dominating the west coast tech scene, there is something special about what is driving this East Coast city’s success.

Transforming an Industry
Unlike many tech hubs across the country who built their success from VC’s and start-ups, New York City has achieved the title of being the second largest tech hub in the world via a much different strategy. Over the last decade the city has undergone a digital transformation featuring already successful, established companies within its reach. In fact, many of the tech jobs in the city are not in technology companies at all. Rather, they are within the industries that they city has proven itself as a world leader in already – areas such as finance, media and advertising. This transformation has established New York City as a key player in the digital world as financial organizations such as #AmericanExpress, #BankofNewYork, #BankofAmerica, #Barclays #GoldmanSachs, #Moody’s and #MorganStanley

Rather than start-ups and VC’s bringing talent to the area, alternatively New York City attracts start-ups to the area with its talent. More start-ups bring more VC’s such as #InsightVenturesPartners, #ScoutVentures, #ThriveCapital and #UnionSquareVentures, and the cycle begins. In fact, New York City already skyrocketed to rank 2 in funding availability and quality in 2020.

It’s all about Diversity
With a population nearing 8.5 million residents, New York City is home to more than 410,000 women owned businesses and over 1 million degree holders in science and engineering alone. Needless to say, the city is definitely not running short on talent. In addition to its highly skilled talent pool, the area is also attractive to those who prefer a diverse economy as opposed to the technology hubs dominating the West Coast.

Home Grown? Yes Please!
With the amount of talent and companies coming to the area, the number of jobs continues to increase. Tech giants like #Amazon, #Apple, #Facebook and #Google are taking notice. According to the NY Times, these big four plan to add 20,000 new jobs within the city by 2022. One of the reasons this growth can happen is the confidence in the local market. In fact 87% of companies in New York city felt assured that they could find the talent they needed locally.

It Just Keep Growing!
As the city’s digital transformation continues, Accenture and Tech:NYC reported that 85% of companies were planning to increase tech hires by more than 20%. As the digital era reaches new lengths, classic industries have had to change their methods too in order to stay competitive. As the digital landscape evolves, the needs for Analytics, Cyber Security and Big Data grow naturally alongside. Over the past 5 years, VC funding in #AI and #Big Data in New York has surpassed Boston and San Francisco, and Cyberscurity in the city has now become a billion dollar industry with companies such as #Rootstrap, #Apro Software, #Elasticity, #Nabler and #Mobidev.

VTRAC is also growing in New York City! If you are a technology enthusiast living in the city or looking to make a move, let’s chat.