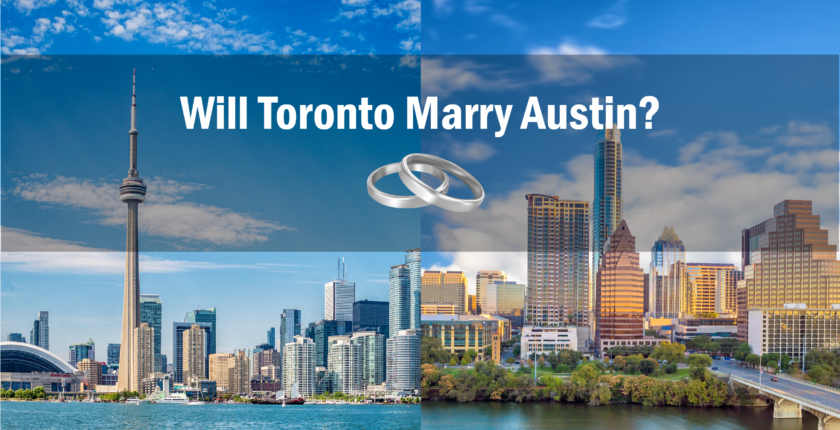 For years, Toronto has dated New York, Chicago and San Francisco and has been seen canoodling with the Miami area. Even though New York seems to be the natural path, could Austin be the one to take Toronto’s heart?  Over the years we have partnered with some of the best technology organizations in both cities, and it seems that at least an engagement ring may be in the works. Here’s why:

#Toronto is the largest hub in Canada and one of the leading cores in the global technology industry, generating $70 billion in revenues annually. In 2020, Toronto tech firms released close to 45,000 jobs, a total higher than the San Francisco Bay area, Seattle and Washington, D.C. combined! The Kitchener-Waterloo Area (KWA), about an hour from Toronto as become highly concentrated with technology companies and has now been likened to Silicon Valley, earning the title of “digital corridor” by the Branham Group,. Toronto is the third largest center for ITC in North America with more than 15,500  companies in the technology sector and close to 250,0000 workers.  Toronto is also home to a large startup ecosystem which continues to grow year-over-year, and VC investments are growing on a daily basis.

As the business and financial capital of the country, and one of the world’s largest financial districts, Toronto hosts the Toronto Stock Exchange (TSX), the third largest stock exchange in North America.  The city is home to the headquarters of five of Canada’s largest banks, Royal Bank of Canada, Toronto-Dominion Bank, Scotiabank, Bank of Montreal and Canadian Imperial Bank of Commerce, as well as quickly emerging e-banking organizations such as EQ Bank. The region has also emerged as Canada’s largest biotechnology cluster. With over 50% of Canada’s life-sciences companies based in the area, Toronto’s biotech industry is centered around the Discovery District, a 2.5 km2 area of the downtown core hosting a number of large hospitals, leading research institutions. With 5 world-renowned universities and 25+ colleges with extensive engineering and technology programs, Toronto and the KWA continue to grow their talent pools and this is becoming quite attractive to major tech organizations who are building teams in the area such as Adobe, Apple, Microsoft, Uber, Shopify, Hootsuite and Snowflake.

Experiencing a similar situation in #Austin, as many workers have been doing their jobs from their kitchen tables and home offices, the tech sector in Austin is quickly solidifying its status as a key technology hub. The growth and attraction of Austin is nothing new. With bustling food and entertainment scenes, low taxes and reasonable costs of living, between 2010 and 2020 the city grew 30%, making it the quickest-growing metropolitan area in the United States. By the end of 2020, the city was adding an average of 170 people per day according to census counts. While the growth has been sustained for years, the last year has marked a pivotal shift in its population primarily due to Covid-19 effects.

Since the beginning of the Covid-19 pandemic, high taxes and costs of living, wildfires and resulted in the relocation of more than 600 Californian companies to Austin Texas. In fact, a LinkedIn user data study shows that Austin, Texas attracted approximately six times the number of investors, executives and tech workers than Miami.  Records from the U.S. Postal Service also show that Austin has welcomed more new residents from the Silicon Valley area than other regions outside of Texas.

Some of these tech organizations had set up shop in Texas from the get-go. Dell Technologies was founded in Austin and Apple and Facebook continue to hold a large presence. Many organizations in Austin however, are migrants from California who have just recently set up shop in the area. Oracle stated last year that it would move its headquarters to the city, and other tech giants such as Splunk and Dropbox quickly seem to be following suit. Elon Musk has recently established residency in Texas and Tesla Inc. is currently building a $1.2 billion dollar facility in the city’s outskirts with an expected 10,000 new jobs to be created.

According to the Austin Chamber of Commerce, as of June 2021 the tech industry now makes up 17.1% of all jobs in the Austin metro area, with a steady growth rate of 3.5% . The combination of an educated, diverse, hip, hardworking population and a sustainable business environment has resulted in Austin handling the Covid-19 pandemic well and we predict that as the number of technology companies relocating to the area increases, Austin, Texas will continue to establish itself a leader in technology.

While miles apart, Toronto and Austin are two progressive, vibrant and diverse cities who have caught our eye when it comes to technology, talent and promise. Multiple initiatives and supports are also available which promote growth and partnership between the two, such as the Trade Commissioner Service (#TCS), with offices located in both Toronto and Austin.

If your business is growing fast in the U.S. or in Canada and you are considering outsourcing, think about #near-shoring in Toronto and Austin VS going off-shore, keeping jobs and IPs close to home. For more information about the possibilities and how you can set up and grow your team fast, please feel free to connect with [email protected] or call 416-366-2600 x 223.